Namuwiki, Gender Equalism and Antifeminist Disinformation in the Post-Truth Era 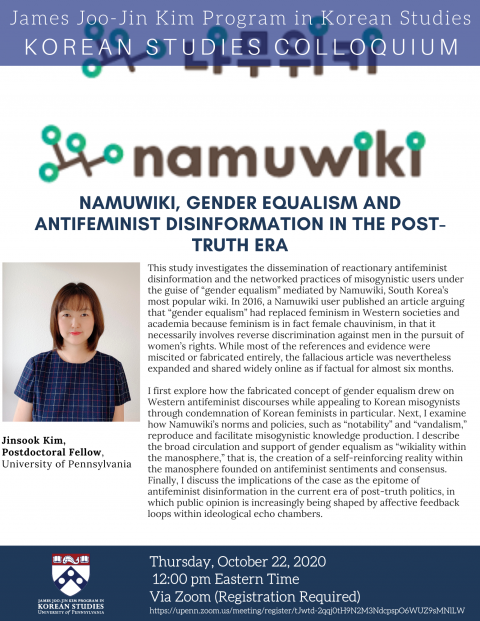 This study investigates the dissemination of reactionary antifeminist disinformation and the networked practices of misogynistic users under the guise of “gender equalism” mediated by Namuwiki, South Korea’s most popular wiki. In 2016, a Namuwiki user published an article arguing that “gender equalism” had replaced feminism in Western societies and academia because feminism is in fact female chauvinism, in that it necessarily involves reverse discrimination against men in the pursuit of women’s rights. While most of the references and evidence were miscited or fabricated entirely, the fallacious article was nevertheless expanded and shared widely online as if factual for almost six months.

I first explore how the fabricated concept of gender equalism drew on Western antifeminist discourses while appealing to Korean misogynists through condemnation of Korean feminists in particular. Next, I examine how Namuwiki’s norms and policies, such as “notability” and “vandalism,” reproduce and facilitate misogynistic knowledge production. I describe the broad circulation and support of gender equalism as “wikiality within the manosphere,” that is, the creation of a self-reinforcing reality within the manosphere founded on antifeminist sentiments and consensus. Finally, I discuss the implications of the case as the epitome of antifeminist disinformation in the current era of post-truth politics, in which public opinion is increasingly being shaped by affective feedback loops within ideological echo chambers.