A Parallel World?: Notes on Alternative Academia in South Korea 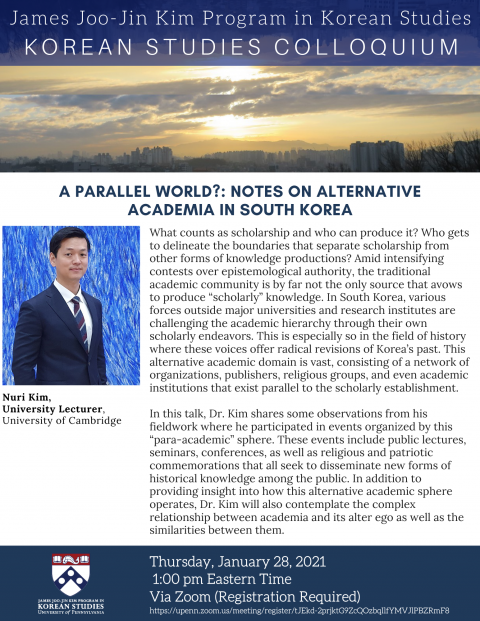 What counts as scholarship and who can produce it? Who gets to delineate the boundaries that separate scholarship from other forms of knowledge productions? Amid intensifying contests over epistemological authority, the traditional academic community is by far not the only source that avows to produce “scholarly” knowledge. In South Korea, various forces outside major universities and research institutes are challenging the academic hierarchy through their own scholarly endeavors. This is especially so in the field of history where these voices offer radical revisions of Korea’s past. This alternative academic domain is vast, consisting of a network of organizations, publishers, religious groups, and even academic institutions that exist parallel to the scholarly establishment.

In this talk, Dr. Kim shares some observations from his fieldwork where he participated in events organized by this “para-academic” sphere. These events include public lectures, seminars, conferences, as well as religious and patriotic commemorations that all seek to disseminate new forms of historical knowledge among the public. In addition to providing insight into how this alternative academic sphere operates, Dr. Kim will also contemplate the complex relationship between academia and its alter ego as well as the similarities between them.